When I heard that the first Devspeak for the Epic Class Drop was the Warrior, I was a little disappointed. My least favorite of the original four classes, the Warrior was going to be interesting enough to examine, if only to learn the format for the upcoming classes. But all in all, I expected it to be boring.

Boy, was I wrong.

Hidden in the disclaimer was a series of seven clues (really eight actually), all very convoluted. I am going to map out the epic journey that the community took to get to the epic conclusion. To be clear, I did not solve these all. In fact, by the time I got around to going on Wildstar Central, I found out that the only ones I solved on my own, the community had already solved. Credit goes to the amazing people on Wildstar Central and the Wildstar Subreddit.

Taking this one frame at a time, I will explain the meaning behind each of them, and we will look at the final reward!

Before we talk about each slide, here are the things you need to know!

Here are the slides: http://imgur.com/a/MRPLv

Okay, first, we need to look at the background shapes in the slides. I overlaid them on top of each other, but they were a mess because my Photoshop skills couldn’t remove the text. 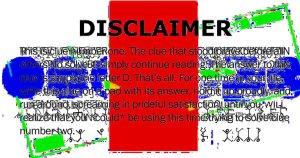 But it was very obvious that there were three types of shapes, as seen here: 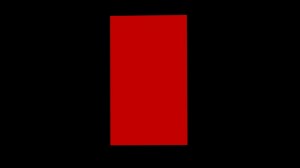 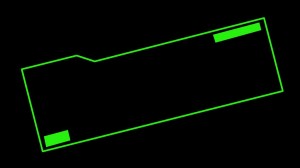 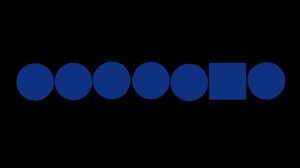 One was a red rectangle of varying heights, one was the seven blue shapes in a row (the 6th of which was a square), and one was a green box with green areas inside. NOTE: The image above does not have all of the green areas inside the box.

We’ll come back to the meaning of the shapes presently. First, let’s look at the slides. 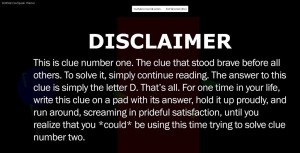 This slide seemed fairly obvious. The clue was “D.” But the wording was strange. We’ll come back to this.

Slide #2 was a little trickier, but not terribly so. It reads, “Oh man, we’re getting tricky now! All these clues suddenly aren’t walkovers! Think quick, though: The third letter of the first name of the second narrator to be featured in a Wildstar Flick. Write it down. But don’t feel too flagged yet, we’ve got a ways to go…”

The narrator for the second Wildstar Flick was Kit Brinny (actress Cree Summer). This left us with either “e” or “t” as our clue. 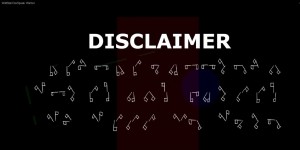 Then it got harder. This is Semaphore, a naval code that uses flags to communicate letters of the alphabet. A simple code, if you recognize it. It reads, “George Harrison tried and failed to tell us this.” A famous Beatles album, Help!, had them doing Semaphore on the front. 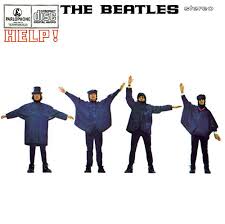 George Harrison is the first on in the picture. They were attempting to do “HELP,” but they messed it up and instead did “NUJV.” Anyway, the point is, using the same code that our clue was using, George Harrison tried to tell us “H,” but failed. Thus, “H” was the third clue. 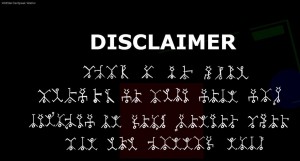 This one was written in the code from the Adventure of the Dancing Men, a Sherlock Holmes story. Oh…and it’s upside down. It reads, “What letter did the pink victim fail to scratch? Yes this code is upside down, I’m a jerk.” This a reference to yet another Sherlock Holmes mystery, from the modern BBC series Sherlock, called A Study in Pink. In this mystery, the victim scratches “Rache,” which is later learned to be the beginning of the word “Rachel.” Thus, the victim didn’t quite scratch “L,” and that is our clue.

This is Korean. Thanks to the Korean Subreddit, we learned that it translates to the following phrase: “You’d like to see all these many videos? I don’t think you can even though you die and reborn 30 times.” This confused us quite a bit, and we were all discussing the meaning of this late into the night. It was really the final piece. We suspected it might be Youtube, where there are over 30 lifetimes of videos. Or, as was pointed out by some people in the Wildstar IRC, the typefont for the “30” was the old Nintendo font.

It actually all boiled down to a concept that was guessed quite early by “teh_ninjaneer” on Wildstar Central. The old Konami cheat code that granted 30 lives. Up Up Down Down Left Right Left Right B A. The big discovery was doing this on the Wildstar Videos page. Go ahead, try it. Click somewhere on the site other than the video (so on the background is good), and use your arrow keys and “B” “A” to use the code. It redirects you to this page: http://www.wildstar-online.com/mRgC35p1.html.

This was yet another piece of the puzzle, the very last piece. If you solve this equation, you get the number 337. 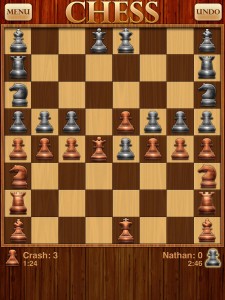 This one was a doozy. Up to this point, we thought we had the letters D(E/L)HLUH (because we thought #6 was still Youtube, therefore “U”, a stretch but all we had figured out so far). Because the letters made no sense, we tried a number of different ciphers. I myself tried letter frequency analysis, four different types of cyclic transposition ciphers, a dozen different ciphers all said and done. All using variations on the keyword. I even thought about a one-time pad, but I didn’t know what to use as a key, since it has to be as long as the original message. I was still stuck on the other letters being the key.

It actually came back to the shapes and the odd wording of slide #1. Vintrove on IRC discovered that he could overlay the green box on the first slide perfectly. 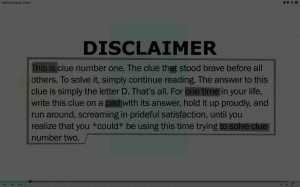 This is something called a Cardan Grille, and it reveals the phrase, “This is a one time pad to solve clue.” The first slide was the key to the one-time pad! The lengths were different, so I hadn’t even thought of using it, but the whole thing wasn’t used. Going to a decoding service, you could type in the clue from slide #7 with the first 95 letters from slide #1, and you get, “YOUR LETTERS AND NUMBERS ONLY NEED ONE MORE LITTLE FRIEND THE HIGHEST NUMBERED LETTER THAT CORRESPONDS TO A PRIME” (spaces added for clarity). This is of course, 23, which is “W.” We also solved this before the Korean clue, so this confirmed that we were indeed looking for a number.

We got this from the shapes. A really good summary of where we were right before we solved the Korean clue is here.

The red rectangles were different sizes on different slides, and it was entirely missing from the Korean slide, which is the only number. It was surmised relatively early on that the rectangles indicated upper or lowercase letters. This turned out to be correct, so the slides that contained “D” and both “H”‘s were uppercase, and the rest were all lowercase.

The blue circles were in the slide in different orders, indicating that the final answer was probably an anagram of the slides. The blue square corresponded to the only number in the group, 337. What we got when we arranged the slides in order of their circles from left to right was: DHw(e/t)H337l. Trying both of the options, DHweH337l and DHwtH337l, on the Wildstar website was what did the trick. The answer was Wildstar-online.com/DHwtH337l

This answer gave us one of the coolest videos we’ve seen yet. I can’t wait for the next Devspeak! Go check the video out!

Many thanks to all of the great people who solved these clues and helped contribute in any way to the discussion! It was a group effort! Thanks to Carbine for putting out such an amazing video with an amazing puzzle to figure out on top of that! It was highly ingenious. It is so awesome to be part of a community where such a great challenge is issued and the community works together to solve it.

One Response to “The Great Warrior Devspeak Adventure”