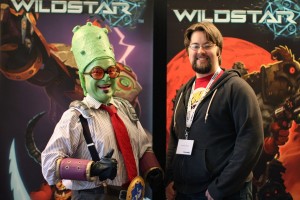 This last weekend, we here at Wildstar Radio had the extreme privilege of watching David Bass sing karaoke. We also had a lot to drink.

Oh yeah…and we had our minds blown.

You see, this last weekend was Arkship 2013. This event was a chance for us to interact with the Devs, to get a little more information on this awesome game they are building, and to form deeper friendships with both the crew at Carbine and our fellow Arkship passengers.

Most of this weekend is off-limits to talk about, as I am under an NDA unfortunately (or fortunately, I guess, as there were many embarrassing things I saw when people were drinking). 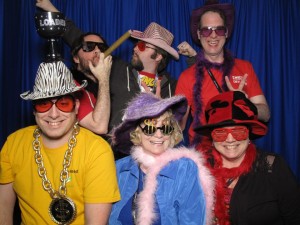 I’m middle-back. Just a rum and coke, I swear!

What I have been cleared to share with you is my impressions of my playtime, the general panels we went to (with no details), and some cool pictures of the laminated class sheets that they had next to every computer for us to peruse.

Your first questions probably are:

Well, I can definitely answer number 3 (though the answers for 1 and 2 are “otherworldly” and “angelic,” respectively).

The game had a very familiar feel to it, as it was an MMO. The quest system was straightforward, with a few exclamation-point hats and quest hubs, but there were a lot of quests (I would venture to say 60%) that were not in the quest hubs and were given in unique ways. I initially went in with the intent to quest and mostly ignore my Explorer path, but after my first hour of playing, I had wandered all over the map, had 15 or so quests in my log that I hadn’t completed, and I was three levels higher. Oh and it went by in the blink of an eye.

I have never explored so much in an MMO, because I typically carve a path straight to and from the quest objectives, but this was the game of “ooh, what’s THAT?!?”. I had seriously bad ADD when it came to staying on task, and I loved every second I spent in random tunnels or climbing up jumping puzzles (which I typically hate). Double-jump makes jumping puzzles a lot more fun, just fyi.

In general, the combat was very visceral and engaging. I was rewarded for being fancy in my combat, so I took great pleasure with finding the most impressive ways to kill things. Dodging, interrupting, and kill streaks were all highly encouraged, and I actually felt like killing things for the sake of killing them, which is unusual for me as well (and it sounds bad out of context too).

The telegraph system has been mentioned in several articles on the interwebs, and it doesn’t fail to deliver the easy-to-learn, hard-to-master combat that we pros have been waiting for. I actually like it better than the Guild Wars 2 dodge system.

The classes are well-designed, but I have since been told that the classes have gone through major renovations since the build we played. In fact, the pictures at the bottom of this article are of the old build that we played, and it has since been worked on quite a bit.

During our playtime, we killed the big world boss Metal Maw. We were apparently the world first, as several groups have tried before and failed. That is pretty exhilarating, but I am sure that Metal Maw “learned” our patterns (i.e. the developers took note) and will now be harder when we get to him when the game actually launches!

As a sidetrack, the Devs were constantly taking notes and asking us questions, as well as providing answers when we didn’t understand something. They were not only extremely helpful, but they also were incredibly engaged with what we were doing. They wanted to know everything we were thinking so they could take our feedback and make the game better. They are so dedicated to giving players the game that players want to play.

We heard and saw stuff. That’s all, move along!

Okay, just kidding, I can give you slightly more than that. We attended panels on the Elder game (raids, PvP, solo content), Housing, Combat and PvP, UI and Addons, and Deradune Feedback (which was more, “hey tell us how you liked the zone and the game”). I can’t say much beyond a few words per topic.

Elder game: I might actually enjoy raiding in this game. The story looks awesome.

Combat and PvP: I instantly decided I will do nothing in the game except Warplots for 99% of my playtime. I am quitting all other games to play Warplots in Wildstar.

UI and Addons: They are taking a unique spin on the UI and may set the standard for what games do in the future.

Deradune Feedback: This I can talk a little bit more about. They were really interested in the quests, the paths, the interactions with monsters, Metal Maw, difficulty levels, and pretty much everything about the game we had seen. I was really impressed with their lack of defensiveness, their openness, and their desire to listen to what we had to say with humble hearts. Not everything we said was good, but they treated us not only as future customers and experts at playing MMOs, but as equals and human beings. We had an impact this last weekend, and that is awesome.

Finally, I will display for you the class sheets that were given to us. Again, these are from a very old build. The Spellslinger for example underwent a huge overhaul the week before the event. Things are always changing, but here are some of the ideas they have had in the past. Click the thumbnails for bigger pictures! 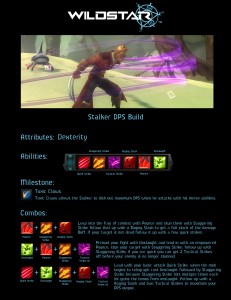 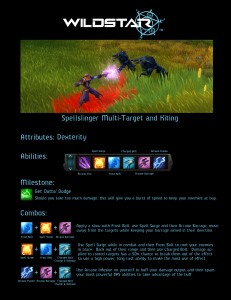 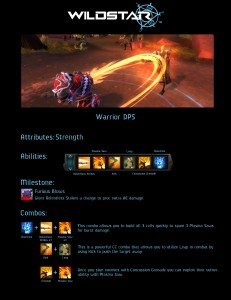 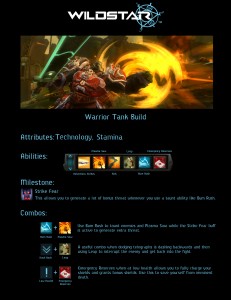 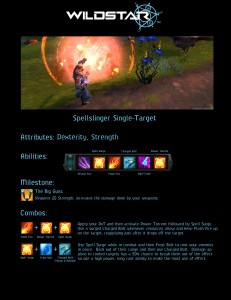 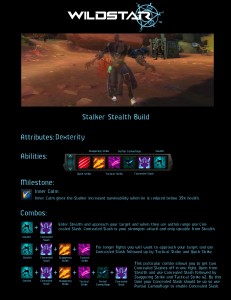